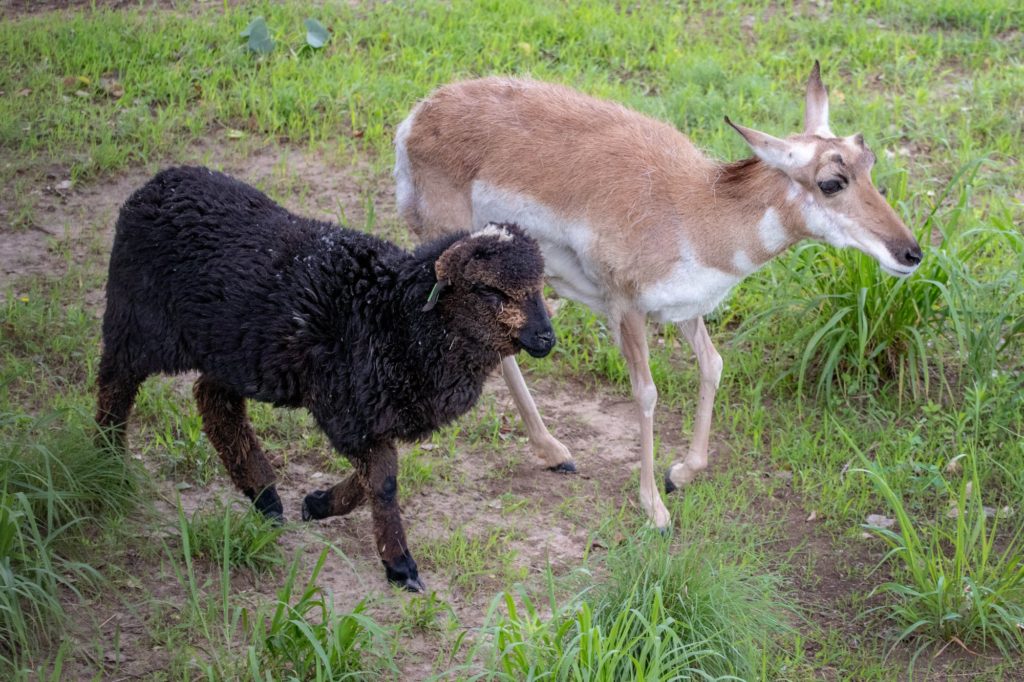 Omaha, a 14-year-old North American pronghorn, has called the Sedgwick County Zoo home for a number of years. Last year her companion, Jalapeno, was transferred to another zoo, leaving Omaha as the only pronghorn at SCZ.

Zookeepers noticed that Omaha was growing increasingly anxious and apprehensive to be in her habitat alone. Unless a keeper was outside with her, she would choose to stay in. Omaha needed a companion, but SCZ wasn’t on the list to receive any new pronghorns – so keepers got creative.

Elvis, a one-year-old Navajo-churro sheep, moved from the Children’s Farms to North America to provide Omaha with the company she needed.

Omaha, who has arthritis and vision trouble, was timid toward the very energetic Elvis but her keepers soon showed her that he was a part of her new herd. They weren’t given full contact initially but they were able to see each other and touch noses. Omaha soon began checking on Elvis often and lying down in her stall next to his. Elvis would vocalize whenever Omaha wasn’t in his sight.

Elvis eventually took introductions into his own hooves by jumping over the 3-foot door so he could be with Omaha. He loves to touch and chase his new friend – occasionally earning himself a “time out.” Keepers began taking Elvis for walks around the perimeter of the yard each day in order to give Omaha a bit of a rest.

Now, Omaha and Elvis spend all day every day together; grazing, sleeping, and enjoying each other’s company.

Director's Scoop Previous Article New At The Zoo Next Article